Well the rally is over and I still have my checkbook intact. Though we were tempted and the salesman hasn't given up, we think we'll keep our current coach for another year.

If you're wondering what a rally is like, it's like spending a week with some of your best friends. Each day starts with a full breakfast. During the day there's seminars, crafts, and classes. The techs come and work on your coach to fix small problems. There's a vendor room to tempt you with new goodies.

At night there's a happy hour from 5 to 6 with a complete bar and a salad bar. The bar closes at 6, then there's announcements and introductions. Then a full dinner is served, including desserts. After dinner there's entertainment. On Tuesday night they featured the Diamonds, who played 50s music. On Wednesday there was a one man band, who did comedy, impressions, and played 2 instruments at the same time. On Thursday they featured a 11 piece swing band(John's favorite). And on Friday, the final night, they featured a country band. Lots of clapping, dancing and fun.

The weather was nice on Sunday & Monday, but on Tuesday a cold front blew in and I mean blew. The weather was cold with a 30MPH wind blowing. Most of the activities were inside so it didn't really affect our enjoyment of the rally, but going from venue to venue was very cold. And, since the new coaches were outside, we didn't spend much time in them. God works in mysterious ways.

We had a very good time, but with the next 3 rallies in the Midwest and the east coast, we don't know when we'll be able to attend another one. But if we're close to one, you can bet we'll attend it.

If you're interested in the new Monaco coaches, here's a link to their website:
http://www.monacocoach.com/
Posted by John Huber at 7:43 PM No comments:

We made the three hour journey from La Mirada to Lancaster without a problem other than the potholes that moved everything around in the MoHo. We though that we Californians had passed bond issues to fix the freeways back in 2006. Nothing has happened yet on I-5, we can tell you that from first hand experience!

The rally starts on Monday, but we are meeting some good friends from Monaco Northwest, Ron & Dona Davis, on Saturday so that we can park together. Here's a picture of Ron & Dona's beautiful Signature next to our old Dynasty. They have a great rig. 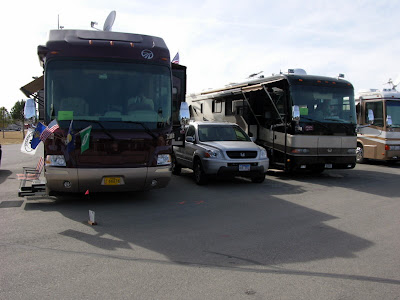 By the way we have a sort of new addition to the MoHo. We bought a flagpole to attach to the ladder back in March 2007 at the Macon Monaco Rally. Well we finally bought a flag, and John finally got it attached to the ladder. Looks pretty good. 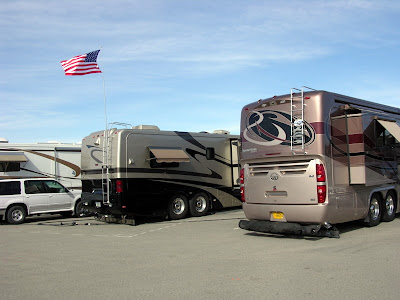 Now all we have to do is figure out a light to keep it lit at night
The real danger of this rally is right behind the motorhome. There sits all of the new Monaco models, all bright, shiney, and having that new coach smell. Oh, the temptation. 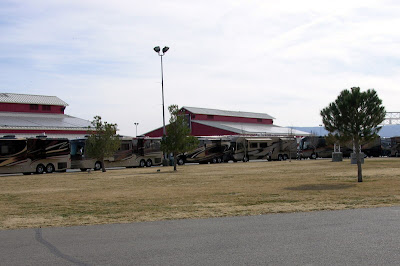 They have numerous events around the coaches to get you close to them and salesmen, starting tonight with beer, wine, soup & hors d'oeuvres(I had to look up the spelling of that). Hopefully we will be able to resist. With the stock market performance this year we'll probably keep what we have. 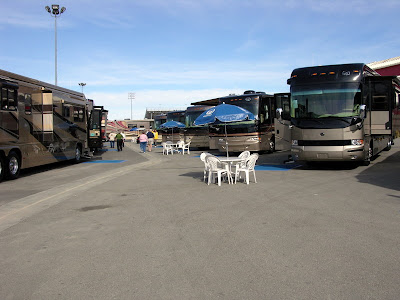 But they are awfully tempting. There' vendors here selling everything from sponges to new shades so we'll probably buy something.
There's also seminars on different parts of the motorhomes, craft classes, dinners, entertainment and good fellowship. We'll let you know what happens.
Posted by John Huber at 3:03 PM No comments:

We just want to wish everyone a very "Happy Valentine Day". We know each of you spent it differently, but we're sure in a very special way. We've been blessed during our 39 years of marriage, and each special day we try to look back and remember all of the special times we've spent with friends and family. Thank you for all of these special years. 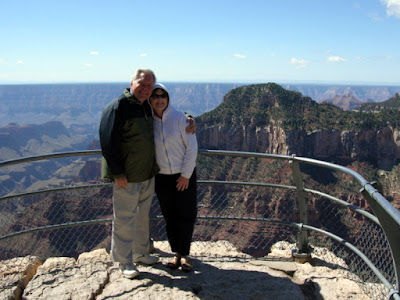 We spent the day together, like most days since our retirement. We put together a birthday package for Jeni's birthday on 2/19. We took it to the post office, then we went to a special lunch. We decided a long time ago that fine restaurants serve great lunches at lower prices than dinners, and it's a lot less crowded on holidays.
The restaurant we choose is the Yard House. It's a new chain that is mostly a sports bar. It had lots of TVs around the room, but it played nice music during the lunch. It was very good, and we'll probably go back to try other items on the menu.
After lunch we went to the movies, something we don't do often enough. Since it was a matinee, it was lower priced and less crowded. We saw Bucket List, which was recommended by Lois. She was right on, it was a great movie that kept your attention during the entire film. We both left teary eyed at the end.
Share with us how you spent Valentine's day in the comment section.
Posted by John Huber at 9:15 PM 1 comment:

While we're staying close to Matt & Suzanne's new house, we decided to help them with a few projects.


John & Matt put in a new sprinkler system for the backyard. The front yard came with landscaping & sprinklers, but not the back. Matt took a few days off of work and rented a trencher to dig the lines for the pipes. Of course he has the Huber luck, so the first trencher didn't work correctly and we had to take it back and trade it for one that worked. That put us a day behind, but we're the patience type. That left it half finished on Super Bowl Sunday. Needless to say, nothing got done on that day except that Matt & John were glued to Matt's new TV watching the entire game and evaluating each commerical. Did I mention that it rained hard that day. 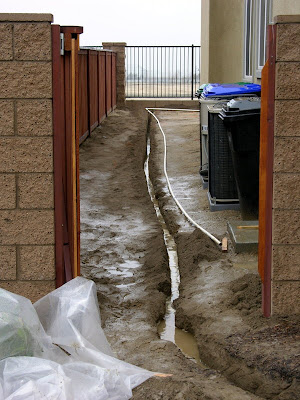 But even with the cold and the flood, Matt and John finished the project the following weekend. Now, onto the concrete patio. John thinks he has convinced Matt to hire out that project! 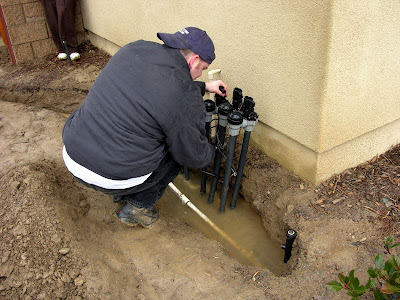 Linda didn't help much with the sprinklers because she was inside painting the family room. Matt & Suzanne did the hardest part of the job, picking out the color. John & Linda took 2 years to decide on a color for their family room.
Posted by John Huber at 9:32 PM 1 comment:

After John got finished washing & waxing the MoHo(no he didn't hurt himself, but it did take 2 days) we decided to do some geocaching. This area seems to have a lot of active cachers with many differnet types of caches. 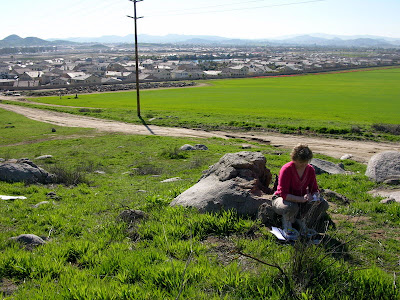 Our first couple of caches were easy but our 3rd one was rated a 3 star for terain and it was straight up a hill. We parked the car at the bottom of the hill and started the long walk towards the top. Needless to say we stopped a few times. 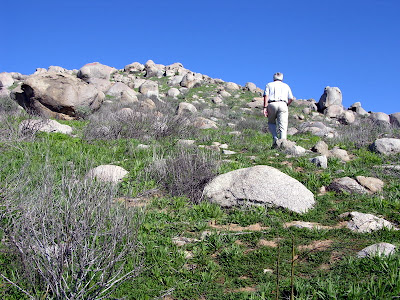 John found the cache at the bottom of a huge round boulder. Luckily, the boulder didn't move while we were signing the log and exchanging some items. 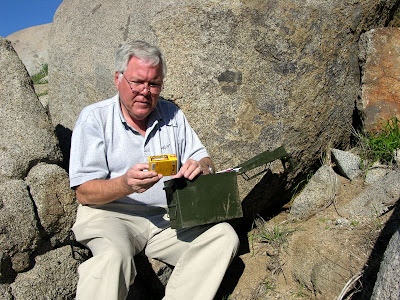 The view from the top of the hill was fantastic. Here's a shot looking back towards our campground. Notice the dairy next to the campground. This is where all of the flies came from when we stayed here in November. Now there's no flies because of a recent frost. They'll probably come back here in the spring.

Here's another shot just a quarter turn from the last one. As you can see, there's a lot of houses where there used to be fields. You can see our car at the bottom of the hill. 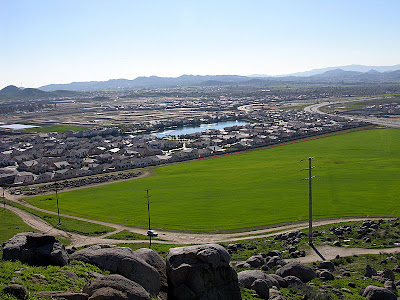 We've moved our home from Desert Hot Springs to Wilderness Lakes in Menifee, CA. We've stayed at this park many times, but we like the park and it's close to Matt & Suzanne. We're also got to pickup our dog, Pearl, from Lois who was very nice to watch her while we were out in the desert. We've missed her very much, and it's great to have her back. She seemed to enjoy it also, with a lot of new smells from all of the other dogs in the park to sniff at during her walks. There's a lot of ducks, geese, and other birds at this park. We enjoy the birds so much we bought a humingbird feeder and a seed feeder to put out during our travels. 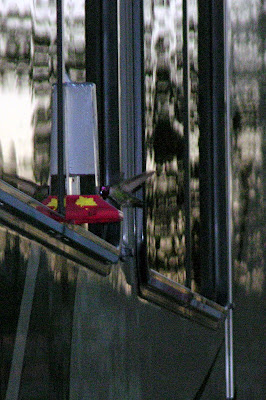 Our humingbird feeder is really neat. It attaches to the window in our living room. At first we thought that the glass would deter the hummers, but it wasn't long before we had our first visitor. It's really fun watching our visitors from inside our home.

While we're here we plan to finish our projects at Matt & Suzanne's, do some geocaching, and John is going to wash and wax our dirty home. Let's hope he doesn't hurt himself.
Posted by John Huber at 9:49 PM 1 comment: