Time is running out as we plan to leave here the day after Labor Day. There's still a few sights we wanted to see. One of them is the Sol Duc falls. Sol Duc is the name of the river that starts in the Olympic mountains and runs into the Straits of Juan du Fuca. It's a premier salmon & steelhead stream. The river forms a canyon that runs up to the mountains. The road follows the river up the canyon, past the Sol Duc Hot Springs Resort, and ends at the trailhead for the falls hike.

The Sol Duc Resort includes cabins, an RV park, and a swimming pool and the hot springs. It's very popular, and the campground is often full.

The trail is a pretty level run up to the falls area, about a .8 mile one way. It wanders through old growth Douglas Fir. The falls themselves are different in that they flow sideways into the canyon. 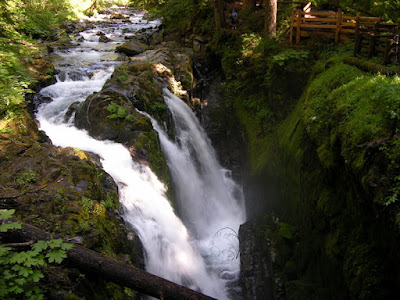 You can hike above the falls to get closer to the river. Here's a picture of John sitting on the rocks enjoying the sights & sounds. 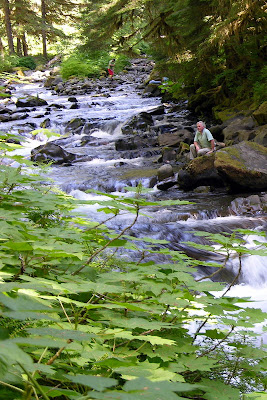 Here's a shot back down the river showing the water shooting across the canyon. We visited the falls in August, so you can imagine the volume of water in the spring when the snow starts melting. 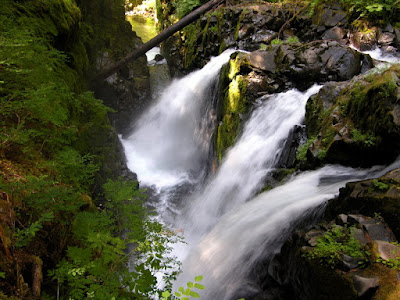 http://picasaweb.google.com/jchuber1/SolDucFallsHike#
Posted by John Huber at 3:38 PM No comments:

We decided to make a day trip to Port Townsend which is about 2 hours east of the campground. We contacted our good friends, Bob & Maggie Lawlor who live in Bellington, WA, to see if they could take the ferry and meet us there. They could and would so a new adventure was added. As we left Lake Crescent it was a beautiful day with no wind so John had to stop and take another picture looking towards the west from the east end of the lake. 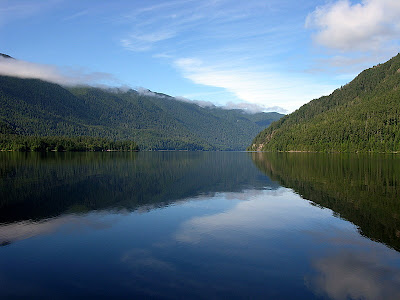 Bob & Maggie beat us to Port Townsend, but waited patiently for us. We began to explore the town which is loaded with Victorian shops and homes. It prospers as a tourist destination. We located a great restaurant that had a deck overlooking the bay. We enjoyed a great meal with our special friends.

After lunch we drove around looking at the different areas of the port, and ended up a Fort Worden. There was a small beach, with a lighthouse at the end of the spit. 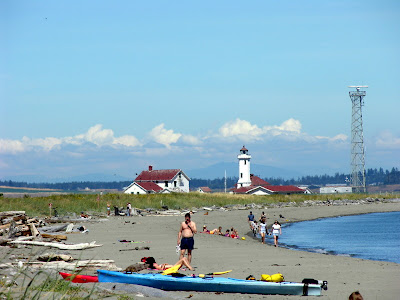 We had to get out and explore the area, walk on the beach and admire some of the boats. Even though it was a weekday, the area was still very busy. Fort Worden is a WA State Park. It was developed as a fort in the late 1890's to protect the Puget Sound area. It became a state park in 1954, and the state has done a good job of maintaining the historic buildings. They also use some of the buildings as conference centers and college seminars. The reason Fort Worden looked so familiar is that it was used as the setting of the movie "An Officer & A Gentleman". After our visit there we had to watch the movie again and we really enjoyed it and recognized a lot of the buildings used in the movie. 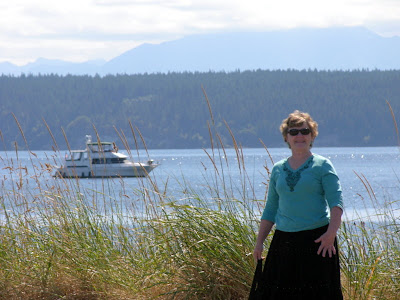 If you're looking for more information on Fort Worden and some great pictures, click on the following link:
http://www.parks.wa.gov/fortworden/default.aspx

We stopped at a unique garden shop on the way back to the campground and we saw some nice water features which we thought Matt & Suzanne might be interested in. They're going to add a water feature to their backyard . 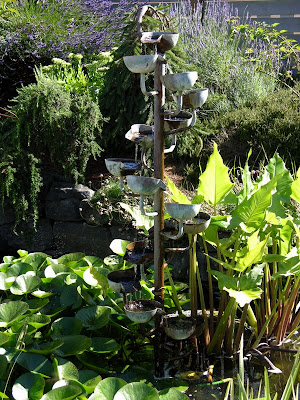 If you would like to see more photos of the day please click on the following link:

http://picasaweb.google.com/jchuber1/PortTownsendWA#
Posted by John Huber at 3:02 PM No comments: