We're starting to settle in here at our volunteer position at Olympic National Park. We're starting to get the routine down, understanding our duties, and making our site more liveable. We had a few problems getting the coach level. Our MoHo has air leveling, which we love. And we've never had a problem getting level-until now. There's a definite slope towards the back of the motorhome. After a day out of level, John decided to try to find a more level position in the space. Did we mention that we barely fit in this space? So, with Linda outside giving directions, and John doing the old forward & back, John almost sunk the front wheels into the mud! You know, a 40' motorhome doesn't bend in the middle like a trailer. We finally got out by putting some boards under the front wheels and carefully avoiding the trees. Whew! John though he was going to have to call a tow truck to get us out, but we were finally out and back on the pavement in front of our site. Now the only problem was to back into our site again without getting stuck. With Linda's good directions, and much patience, we made it back in. Then we got more boards and put them under the back wheels-WOHO, we're level. John doesn't plan to move the MoHo until we leave-and that's going to be tough enough just to get out of the site.

Here's a picture of our site. It's pretty big, but then again we're pretty big. 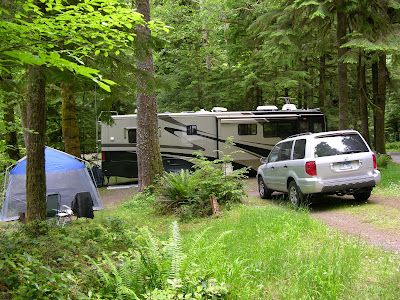 Everyone who walks by just stares at it. Most of the campers here are tenters, or have small trailers, campers, or Class C type of motorhomes. So they all wonder how we got in here, and how we're going to get out.

You'll notice a new addition to the setup, we've purchased a screen room, so that we can have dinner without the bugs. Of course it isn't setup perfect because of the slope, but we think it's going to be pretty nice-if the weather ever warms up. 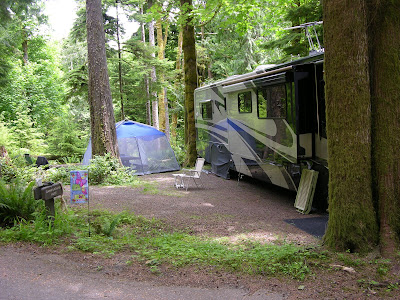 As we mentioned, we're on Lake Crescent. It's 8 miles long and we're on the western shore. There's a small store, boats & kayaks to rent, and a boat ramp. There's a small dock next to the boat ramp where John has done some fishing. We use the beach and dock for our cell phones and to get on the Internet. It's only about 300 yards from our campsite, but we get fair cell phone reception there. We get no cellphone reception at our site. But don't hesitate to call us and leave a message. We love hearing from everyone, and we promise we'll call you back! 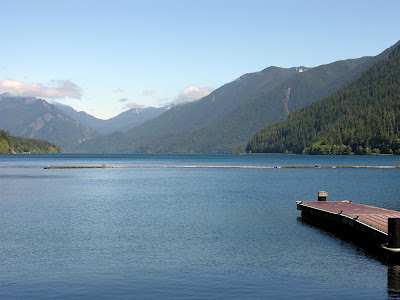 It's hard to see in these pictures, but the lake is kind of turquoise in color. It's very clear like Lake Tahoe. It's 685 feet deep in the middle. There's a special species of trout called the Beardsly Trout. So the lake is catch & release, which pleases us both. He's only had a couple of strikes so far, but he hopes to catch at least one before we leave. 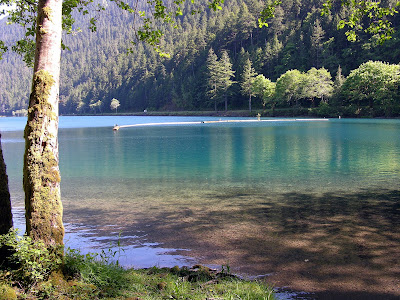 Now we have a new issue-mice. In all of our travels with the MoHo, we haven't had any bug problems. But we now have a major problem. So far, we've captures 3 mice. But we know there's still more coming in because the MoHo is warm, and it's been abnormally cold outside. So we're going to town to try all kinds of different measures to solve the problem. We'll let you know how successful we are.
Posted by John Huber at 4:33 PM 4 comments:

Where Are John, Linda, & Pearl?

Well, the Huber's have moved back to the 40s. Everyone knows that John likes Big Band music like Glenn Miller, but he didn't have to choose a spot to volunteer for the summer that technology wise takes us back to that era.

We're in beautiful Olympic National Park, camphosting at Fairholm campground on Lake Crescent. It's a great spot, but in a grove a tall fir trees. The nearest town is Port Angeles, WA, which is about 45 minutes away. The only issues we have is that we're so far from town and civilization that we have no cell phone, no Internet, and because of the trees, no television. Talk about getting back to basics! So we're watching DVDs, listening to the XM radio, and reading. And the weather has been cold. Who says we're having global warming. John's working on fixing the problems, but right now we have to walk down to the lake to use our cell phones. So if you call us leave a message and we'll get back to you. We actually have a mail address here:

So if you want to see John & Linda stay married after the summer, you'll have to come visit us up here. The closest airport is Seattle, and we'll even come pick you up. Or you can drive up I-5 and take Hwy 101 at Olympia North.
Posted by John Huber at 9:27 PM 3 comments: