It's hard to believe that the whole month of March is gone. As many of you know we decided to park the motorhome for an entire month in one location. After much investigation, and a little luck, we got reservations at Happy Trails Resort in Surprise, AZ. You can read about Happy Trails in another post here:
http://jchuber.blogspot.com/2008/01/happy-trails-surpise.html

Here's a picture of our site. It backed up on a dry wash, or greenbelt, where we enjoyed feeding the doves & quails. In fact we went through 25lbs of bird seed. 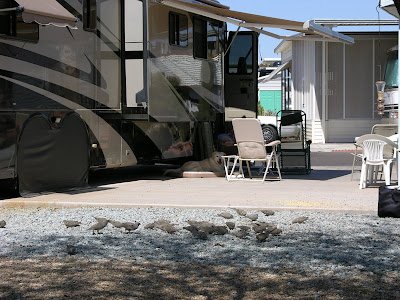 We really enjoyed our site and it's proximity to the clubhouse and our good friends, Allen & Shari. A lot of activities happened during the month. You can read about our visit to Biosphere 2 and Best Friends in other posts. Here's a summation of the other things we do.

We settled in the first week. Linda attended a line dancing class that she really enjoyed. We went to dinner with old friends from the Monaco Northwest group, and new friends that we were introduced to at the resort. Linda spent a weekend in Los Angeles attending a very special baby shower for Katie Wedell and visited with family.

We also went Geocaching. In fact we discovered 10 caches in one day, a new record for us. One of the caches was "A duck out of water" which was out in the desert in a dry wash. 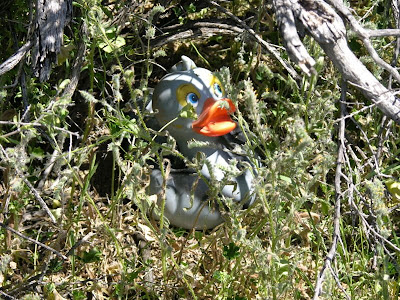 It gave us a chance to try out one of our special Christmas presents, a special pack to wear when Geocaching. Both of kids, Jeni & Matt, made these for us. Otherwise I wouldn't allow a picture of them on me. 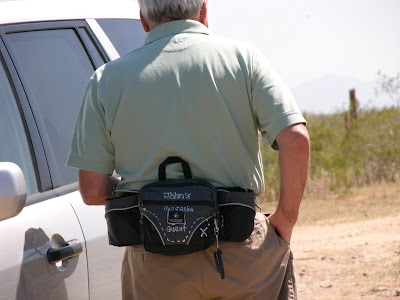 We also got to attend a Los Angeles Dodgers exhibition baseball game that took place in Surprise. They played the hometown Kansas City Royals. The stadium is brand new and beautiful. The game was a long one, but we stayed until the very end. The Dodgers came back from a 5 run deficit, but fell short by 1 run. There was a total of 31 hits, and 13 pitchers were used. We really enjoyed the whole experience. In case you didn't know, the Dodgers are moving their spring training to Glendale, AZ, next year from Florida. It should make it a fun spring of 2009.
In summary, we really enjoyed the area and the fact that we were in one place for a longer period of time. We made some very good friends, and we appreciated the fact that it only 5 hours from our family in Southern California. We're currently planning on spending November through March in Happy Trails next year.
Posted by John Huber at 8:45 PM No comments:

We had a special treat when Jeni decided to spend her spring break with us in AZ. Of course the real reason for her trip was to visit the Best Friends Animal Sanctuary in Kanab, UT, with her Mom. This was Linda's second visit. The details can be found here: http://jchuber.blogspot.com/2007/09/best-friends-animal-sanctuary.html
I decided to stay back at the motorhome with Pearl.

When they got to the sanctuary they took the tour of the entire facilities. During the tour, Jeni got to meet something in addition to the regular animals. 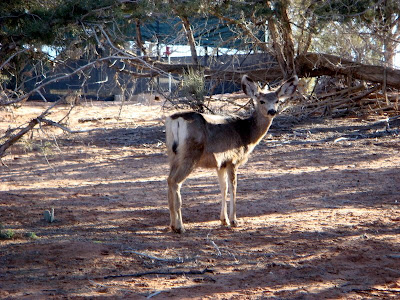 Linda & Jeni dug right in with the volunteer work, starting with the dogs. In fact Linda enjoyed working with the dogs so much, the only other area she worked in was the bird area. I'm sure that surprises everyone! Jeni divided her other time with the cats (another surprise), bunnies, horses, and birds. It was like an animal smorgasbord.

Here's one of the friends Jeni made besides all of the dogs and cats. 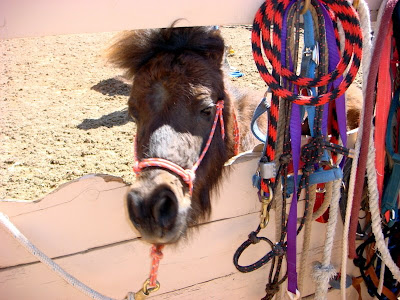 One of the unique experiences Best Friends allows is the chance to take an animal back to your room at night. Of course Linda & Jeni took advantage of this option. Here's one of the dogs that they helped socialize during their visit. 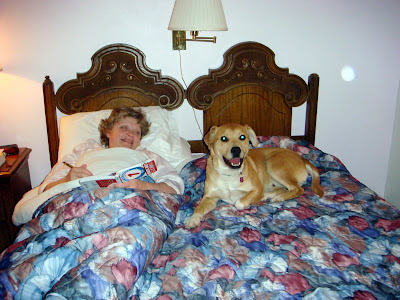 And you wonder why I stayed back at the motorhome! I didn't think there would be space left for me to sleep.
Both of my girls had a great experience in their volunteer work. They're looking forward to doing it again soon. If you want to learn more about Best Friends and the work they do worldwide, here's the link:
http://www.bestfriends.org/
It's a great organization. In fact they now have a TV show called Dogtown on National Geographic Channel. Watch it and you can learn a lot more about it.

Posted by John Huber at 8:04 PM No comments:

A Visit to Biosphere 2

On Saturday, 3-15, we decided to visit Biosphere 2 near Tucson. It's about a two hour drive from Happy Trails. Our good friends Allen & Shari Kainu accompanied us on this adventure. The Biosphere 2 was an experiment in living in a confined, self sustained space for a long period of time. Biosphere 1 is our earth in which all of our needs are meant within our small sphere. They tried to replicate all aspects of earth within the sphere. There is a rain forest, a desert, a Savannah, and a sea including a corral reef. There's also an area for growing food and raising animals. It was a noble effort, but it didn't work out exactly the way they planned. There was personnel problems, a lack of oxygen, and a real shortage of food caused real stress that resulted in ending the mission early. Even with all of these problems, the crew was able to last 2 years. A second mission was planned, but it only lasted a couple of months. After that, the biosphere was never sealed again. It was turned over to Columbia University who built some classrooms and dormitories and conducted experiments. After eight years control of Biosphere 2 reverted to the original owners, the Bass family. They put it up for sale in 2005, and it was purchased by a housing developer in 2007. But the Bass family retained control of the 3.5 acres of the Biosphere complex, and leased it to Arizona State University for $100 year. They also provided 30 million dollars to maintain the facilities and conduct new research. This marks a new beginning for Biosphere 2 and promises many improvements over the next few years.
This is a picture of the living areas of the Biosphere. The crew members had private living quarters, meeting areas, labs, kitchen, and behind the tall structure are the farming and animal areas. 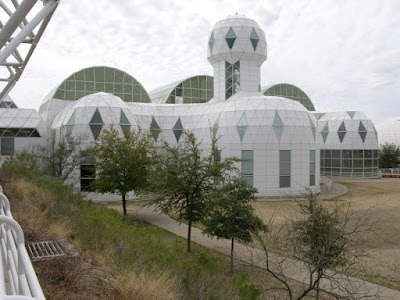 Here's a picture of the sea, with a rock wall that created the waves to allow the reef to stay alive and the fish to live. In fact, one of the few remaining creatures in the complex are some fish in the sea. 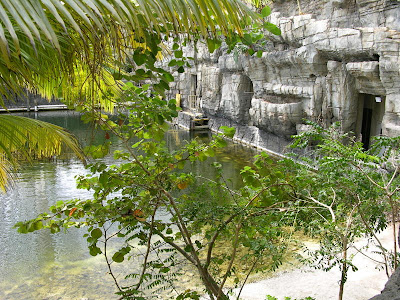 The rain forest was recently added to the tour. Here you can see the mist in the air that creates a great growth area for bamboo and other jungle type plants. 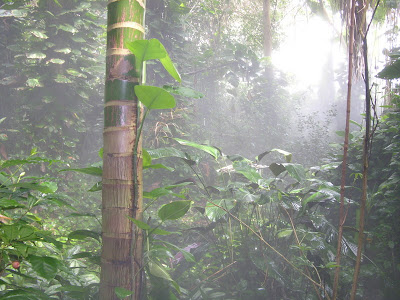 During the tour we noticed a lot of maintenance issues that need to be addressed before much new research could be conducted. With the new infusion of money we're sure there will be many improvements, and some exciting new discoveries from this unique place. If you're in the area make sure you take the time to tour this special place and keep track of progress on the website.
If you're interested in more information about the history and missions, check this entry on Wikipedia: http://en.wikipedia.org/wiki/Biosphere_2
When we're in Arizona next winter we plan to revisit this interesting place.

Posted by John Huber at 9:38 PM No comments:

We arrived here in Surprise, AZ, at Happy Trails for a month long stay. This will be the first time we've stayed in one place for an entire month other than Southern California to visit family and celebrate the Holidays. And we're looking forward to our stay.

There's a whole lot going on here in the west Phoenix valley. There's a lot of activities here at the resort, including pickleball, crafts, swimming, classes, and on site shows. Outside of the resort there's spring training baseball games, and a lot of museums, art shows, biosphere, and other AZ attractions. We don't know how much we'll see during this visit as we plan to enjoy the resort activities. This might be an area we'll return to every winter as the people are very friendly.

The trip here was not without incident. We were right at the junction of the 91 freeway & the 60 freeway, where there is a lot of construction, our motorhome died in stop & go traffic. We called coachnet, our roadside assistance program, and they sent out a VERY BIG tow truck to take us to Cummins to repair our coach. They actually sent two trucks. It took about an hour to get us hooked up. They had to remove the drive shaft to tow it. Finally we were on our way, following our motorhome in the Honda. After about 100 feet, the tow truck stopped. We couldn't figure out what the problem was from the car, so John got out to check with the driver. It seems that the tow truck had two flat tires due to picking up some metal pieces from the construction. Luckily, it was the tow truck and not our motorhome. But that delayed us another two hours while the tow truck got new tires on the rear.

Cummins was open until 11:30pm so they started diagnosing the problem right away. We were anxious to get going, and Cummins was closed on Sat. & Sun. It turned out to be a fuel pressure sensor. The good news they had one in stock, the bad news was the part was $200. Including the labor charges, it was another $500 bill. But we were out of there by 10:00pm. The decision then was where to spend the night.

As we were driving toward Indio, we made some phone calls looking for a stop over just to sleep through the night like a Wal-Mart. But we couldn't find anyplace that allowed overnight parking, so we kept driving. Or we tried to keep driving. John, in his great wisdom, was waiting to get diesel out in Palm Desert because it was lower in price. Well, because of the low fuel the motorhome kept stalling, usually in the middle of the street. After priming the fuel pump, it would start again, go for a short distance, & then die again. John was beginning to panic a little. After trying to get into a fuel stop from three different directions, including a u-turn, we finally made it into the diesel island. After fueling up, the motorhome ran great and John learned a difficult lesson. Don't let the fuel tank get to low.

But we still didn't have a place to spend the night. We had called the Spotlight 21 casino to see if they allowed overnight parking, but they said no. We resigned ourselves to a long drive and an overnight in a rest stop. But as we passed the casino, John's sharp eyes noticed a lot of RVs parked in a separate parking lot. We got off the freeway drove to the parking lot, and parked next to another motorhome. It was almost midnight. So we walked Pearl, pulled the drapes, and turned in for the night. It was not the most restful night, because we were afraid that someone from security would knock on our door, telling us to move on. But they didn't.

From that point on it was a smooth drive to AZ. And a quick check in, park the coach and get to know our new home. You know what they say about the best laid plans. . . . . .
Posted by John Huber at 10:01 PM No comments: