The weather continued to be great. The high is expected to 72! We decided to take an extended drive back to our old campground, Fairhom, on Lake Crescent. As we rounded the curves and got a good view of Lake Crescent, we had to stop and take a picture because it was just gorgeous. 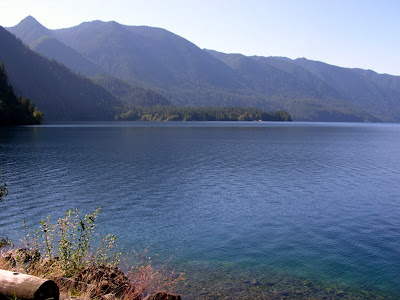 We drove around the campground reminiscing about our stay. One of the pictures that John wanted was of the path where he slipped an fell on his butt. Here it is. Doesn't look very dangerous, does it. But it did the job on John. 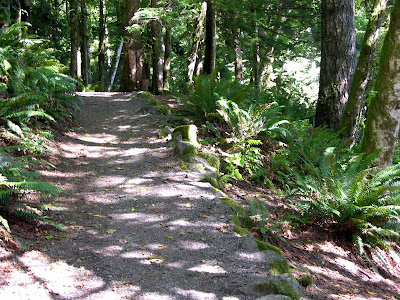 After we left the campground, we went up the Sol Duc valley to view the salmon cascades. Every fall the salmon return to the headwaters where they were born to spawn and die. This particular point is a tough spot for the salmon to get past. They have to jump up the waterfall. Luckily, the road was right next to the river so John was able to get a view and spotted some salmon jumping up the falls. 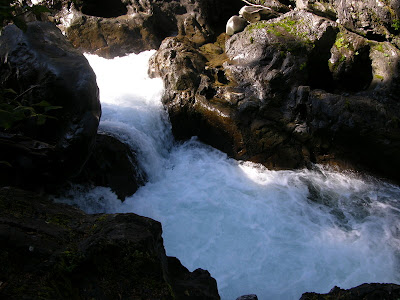 Unfortunately, it's very tough to get a picture because the fish are not predictable, and it's early in the season, so the run is just starting. But it's still a very beautiful spot. 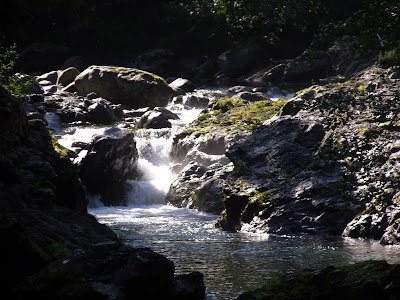 Not only is the view wonderful, but the sounds of the river makes the image complete. We're sorry we didn't have a video camera, then we could have had the sound and probably a fish jumping.

Linda has taken most of the pictures, isn't she doing a great job! I think she may have found a new hobby.
Posted by John Huber at 8:19 PM No comments:

Sunday, 9-28, was our 40th wedding anniversary. Needless to say, with John's injury it was a somewhat quiet day. The weather turned very nice, our Indian Summer. On our way down the hill from the campground we stopped to take a picture of Port Angeles from a turnout close to where we're staying. 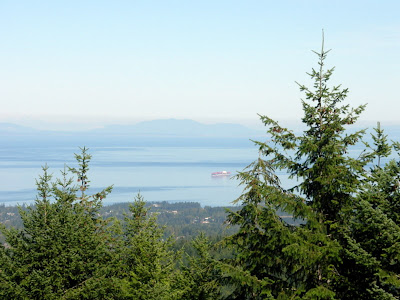 We went to a late lunch at a restaurant call the Crab Pot. It was downtown, close to the ferry terminal. The windows overlooked the public pier and a small beach, along with a view of the bay. Linda had a chicken quesadilla and John had homemade crab cakes. They were both very good, and the views made the meal memorable. John was even able to watch some of the pro football on a big screen.

After our lunch we decided to explore some areas of Port Angeles we hadn't seen before. If you continue to drive on the waterfront past the downtown area, you come to a boat harbor. There's a boat builder in town that specializes in motorized yachts. They start at about $3,000,000 and up. We saw one in the harbor and decided to take a picture of it. 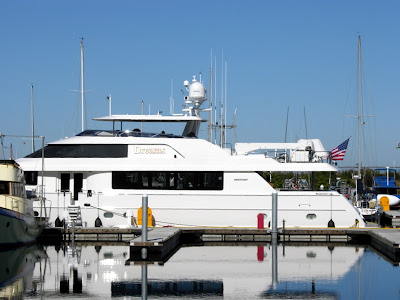 That's a lot of money for a hole in the ocean!

We then continued around the bay on the breakwater, out to where the coast guard station was located. We could look back across the bay to the restaurant where we had lunch, and then up to the hill where our campground is. 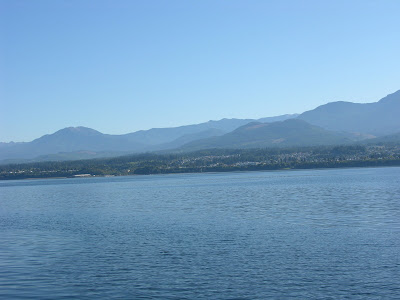 It was not what I had originally planned for our anniversary, but it was nice just being together. We both plan to have a bigger celebration when John is healed and we're in another area. What that celebration will be is yet to be determined.
Posted by John Huber at 7:44 PM No comments:

One of the real joys we rediscovered during our stay here in Port Angeles is how much fun a library can be. If you haven't visited your local library in a while, you'll be really surprised at the changes you'll find.

Our local branch of the North Olympic Library System is in Port Angeles. It is fairly new, having been built in 1998. It's large with many areas for sitting and reading, tables & chairs for studying or computer usage, and a large selection of books, videos, and books on tape to borrow. They also have many computers to use and free, fast, wifi. Since they're part of the larger system, we could request books and videos from other branches in the system. 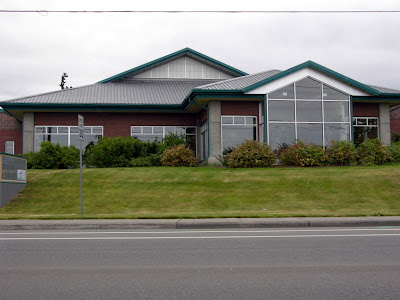 We have borrowed a lot of different books and videos this summer because we don't have TV. And we've discovered new authors and books. John is averaging 2-3 books a week. Linda is averaging 2 a week. We haven't done that much reading in years. And we've enjoyed books on tape as we travel around and explore the areas.
So, our recommendation to everyone is to rediscover the joys of the libraries in your area, and start reading again. It'll open whole new venues for you.
Posted by John Huber at 7:00 PM No comments:

The Doctor and the physical therapist both suggested that John get out more. So, with Linda driving, he began to venture forth (this is a hard thing for John, since he usually does all the driving).

One day we went to the Sequim to visit the local Costco. They had one of those scooters for riding around the store, and John got the hang of it right away. He enjoyed getting out and looking around the store. One of John's enjoyments is sampling new food that is offered a Costco. And he was able to check out the cameras, books and wines. Of course he couldn't drink any wine because of his pain medication, but he still looked. And he bought some Jelly Bellys to enjoy.

After Costco, we stopped at Safeway for our groceries, and they had a scooter too. John's getting a whole new perceptive by shopping from a different level.

The outing perked John up and we think that the Doctor was right, he needed to get out. And we think there will be more outings in the future.
Posted by John Huber at 6:31 PM No comments:

John left the motorhome for the first time since he returned from the surgery on Wed. 9-17. He had a Doctor's followup appointment to see how the hip was healing. The physical therapist gave him instructions and practice on climbing and descending the stairs in the motorhome, and he made it to the car with no problem.

We first had to stop at the hospital for a blood test, then on to the Doctor's office. John hates getting stuck, and he always tells the nurse what a chicken he is, so they take special care on the blood draws.

Once in the Doctor's office, they took x-rays of the hip from all different directions. Then the Doctor reviewed them with us and John got to see the plate and screws for the first time. Everything is healing well and the Doctor was pleased with the progress. The good news is that John will not have to wear the support stockings he had been using to reduce the chance of blood clots. John was thrilled because they were very tight, and had a tendency to itch at night. The bad news was that he still can not put any weight on his right leg. So he still has to use the walker and be very careful.

Our Doctor, Dr. Larson, is a very young man with great credentials. He graduated from Oregon Health Science Center, worked in Albuquerque, NM, & Santa Monica, CA, before coming back to his home town of Port Angeles to raise his family in a small town environment. We're really glad he's our Doctor.

So, 4 more weeks of healing, then maybe John will be able to put some weight on his leg and start walking again.
Posted by John Huber at 6:17 PM No comments:

Bad News & a Change in Plans

For the last couple of weeks John's right leg has been bothering him. It's more in the thigh muscles and it hurts when he does a lot of walking. We thought it would be a good idea to get a doctor to check it out before we left the campground so we went to the ER in Port Angeles. They took X-rays and examined him but didn't see any problems, so they gave him some prescription ibuprofen.

We were able to get into see an Orthopedic Doctor on Wed. 8-27, and they concurred with the ER's diagnoses. They recommended physical therapy, so we made some appointments in Centralia, WA, the area we were moving to next.

Then on Sat., 8-30, John woke up with extreme pain in his right leg, and he couldn't put any weight on the leg. On Sun. we made another trip to the ER. This time they were very busy, and John had to sit in a wheelchair for 4 hours waiting (he was in real pain). After the Doctor examined John, he just gave him some strong pain medicine but didn't order another X-ray. Linda asked if they could do a MRI, so they said they would schedule one. Because it was Labor Day weekend, they couldn't schedule one until Thurs., 9-4. John didn't get out of bed until Thurs. morning because his leg hurt so much.

The MRI was in Sequim, about 45 minutes away. Linda drove him there and got the wheelchair out to transport him into the MRI. The results were very obvious to the technician, but he couldn't tell us anything. He just told us to head for the hospital in Port Angeles. When we got there we found out John had a hip fracture. And they checked him into the hospital, because he was going to need emergency surgery. We tried to figure out how it happened, and the only thing we remember is John falling on his butt while walking the campground. Down near the lakeshore the path changes from asphalt to gravel and that's where John fell. He didn't feel any pain at the time, so he continued to do a lot of walking, and that's must of aggravated the hip. What was probably a small crack eventually developed into the major fracture.

We were a little nervous about the quality of care we would receive, but we were very satisfied with an excellent Doctor and really caring nurses. We couldn't have received better treatment if we were in a large city.

John had surgery on Friday, 9-5, and everything went well. He was released from the hospital on Monday, 9-8, and went back to the motorhome to recuperate. Linda arranged to have the MoHo moved to a campground closer to Port Angeles. Another campground host at the park, who has a motorhome, drove it out of Fairholm campground to the Heart of the Hills campground. It is on the same road that Hurricane Ridge is on . It's only 5 miles to Port Angeles, and we have good cell phone coverage and good Internet access. The only thing missing is TV, but we're getting use to that.

We're still here waiting for the hip to heal. John can't put any weight on his right leg, so he's using a walker. We have a visiting nurse and a physical therapist who come to the motorhome for treatments. And the weather is getting colder and more overcast. We've definitely got cabin fever, but there's not much we can do until the doctor releases John. We're watching a lot of old movies, John's reading about a book a day, and listening to our satellite XM radio for news and baseball games. BTW, the Cubs and the Dodgers are in the playoffs. The good thing is we can turn off all of the election hype.
Posted by John Huber at 6:29 PM 1 comment: