On Monday we spent the day visiting wineries in the Santa Barbara area. Our first stop was the Sanford Winery, which was one of the highlights of the day. We were originally scheduled for a tasting, but after our arrival the sales manager gave us a personal tour! The tour started in the vineyard where we learned all about the cultivation of the Pinot Noir grape which is famous in the Santa Rita Hills area we were exploring. Then we moved on to the production facilities which included a very beautiful barrel aging barn which was built from old growth fir recycled from a lumber mill in WA. 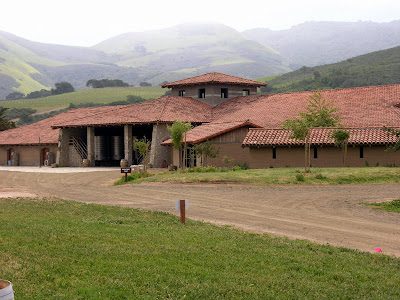 They had a unique fermentation area which was outside, but under cover. All of the tanks are open top, with chilling jackets to control the temperature. All of the racking and movement of wine is by gravity flow. 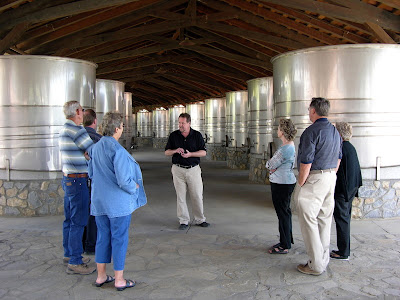 We then tasted some delicious Pinot Noirs. It was a great start to a wonderful day.

Our next stop was the Bridlewood Winery. It is further inland and therefore has a warmer climate which favors Syrah. The style of the winery hearkens to it's earlier role as a rehabilitation hospital for Thoroughbred horses. We tasted some different Syrahs and a nice Viognier. We were disappointed in the reception we received from the tasting hosts, but the tasting room and grounds were beautiful.

Our next stop was the Beckmen Winery. This is a small winery off the beaten path, down a dirt road. They also produce a Syrah, but also have some nice whites, a great Cabernet Sauvignon, and a lot of different variations of Grenache. The vines are originally from the Rhone area of France. Another nice feature of the winery is a pretty pond with picnic tables around. We used the area for a nice picnic and a break from tasting all of the wine. 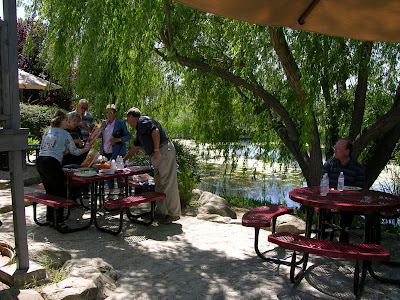 After the lunch break we made a quick stop at the Roblar Winery. It has a timber frame tasting room that includes a restaurant, deli and cooking school. Unfortunately, only the tasting room is open on Mondays. The wines here included a very good Semillon and a limited production Zinfandel.

Next up was the Firestone Vineyards. Yes, this is the same Firestone from the famous tire company. It was one of the first wineries built in the area, in 1972, and it was started by the father-son team of Leonard & Brooks Firestone. In September of 2007 the family sold the winery to Bill Foley, another area pioneer and owner of Foley Vineyards. Bill promises to keep the Firestone tradition intact and he adds his personal touch to the wines.

One of the reasons we chose this winery is the excellent tour they offer. We started in the vineyards, moved on to the bottling line, one of the few in the area, and then into the barrel room. It was interesting to contrast the smaller Sanford Winery to the larger Firestone Vineyards. It added a lot of information to compare and contrast. As you can tell from the picture, we had a really good time. 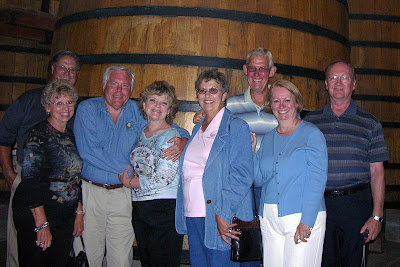 The wines at Firestone were interesting, good values, and they are generally available in many states. Their Cabernet Franc was the highlight of the tasting for John.

Our last stop was one of nostalgia. It was the Fess Parker Winery. Fess is the Davy Crockett of the wine industry. And you can buy a coonskin cap for your wine bottle!

Fess Parker and his family are a major factor in the Santa Barbara area, with many ranches, the hotel, a restaurant, and the winery. The winery features a large number of wines, including many different estate Pinot Noirs and Syrahs. By far their number one selling wine, though, is Frontier Red, and NV blend. It was interesting to view all of the pictures of the famous proprietor.

Click here to see more of the pictures of the wineries:
http://picasaweb.google.com/jchuber1/CentralCoastWineTourDay2Wineries

We completed the day with a light dinner at the famous Pea Soup Andersens Restaurant. Most of us had the soup, and it was as good as John remembered it. The restaurant started in Buellton in 1924, and it's been serving the soup ever since. It fun to find a piece of history as we travel.

It was a long day, but everyone enjoyed it and learned a lot.
Posted by John Huber at 11:04 PM

I have very fond memories of Pea Soup Anderson's. During trips down from Oregon to Grandma and Granddaddy's over Christmas and summer, we used to stop there for a meal. It was delicious.

And Firestone Vineyards was made even more famous because the son, Andrew Firestone or something like that was on The Bachelor. Not that I watch the show but...