Ken & Donna in the Columbia Gorge

The Columbia Gorge was created by the Columbia river (surprise) over thousands of years. The first Americans to explore it were the Lewis & Clark expedition. It very different then before all of the dams tamed the rapids and waterfalls. Now the Columbia is used to ship cargo as far away as Idaho. Because of the steep cliffs there are many waterfalls to view. I-84 follows the gorge, but the best way to see the gorge is to get on the old Columbia Highway which was built in the 1920's for those new cars that were replacing horses. We climbed our way up to plateau for a terrific view up the river. 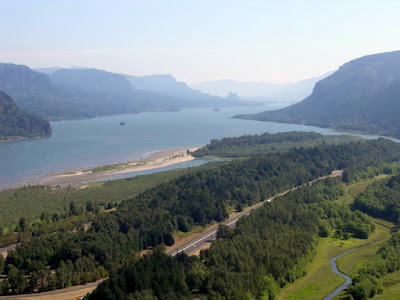 Ken was so excited he had to climb up a beautiful old oak tree for a better view. The next stop was the Vista House, a unique viewpoint that served as a rest area during the 30's & 40's. It had interesting museum in the basement and beautiful views from the deck. While we were on the upper deck, we spotted a hawk and I was able to capture with a faint Mt. Adams in the background. 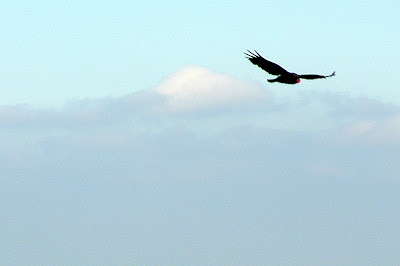 We continued on the old Gorge Road, stopping at all of the waterfalls on the way. Some were close to the road, and others we had to hike to. We finished up at the most photographed falls in Oregon, and the second highest waterfall in the U.S., Multnomah Falls. We hiked up to the bridge to enjoy the view of the falls above us and below us. 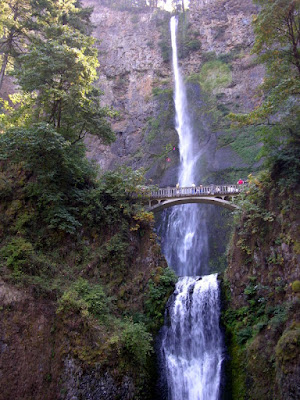 We jumped back on I-84 heading East. We were hungry, so we stopped at a deli in Cascade Locks for a quick sandwich, and then we headed to the Bonneville Dam.
There's an interesting visitor center that describes how the dam was built and how the electric power is produced. As part of the visitor center there's a view of the locks that allow boats and barges to proceed up the Columbia River to inland ports. There's also an underwater viewing window which allows you to view the salmon, steelhead, and other fish that are migrating up river to spawn. It was interesting to see all of the fish swimming hard up the river. There was a fish counter that would push buttons on a computer to identify the fish as they swam past the window, and count them.
Adjacent to the dam is a historic fish hatchery that produces steelhead and salmon to be planted in the river. There was also a strugeon pond that had a 8 foot long "Herman the Strugeon" that swam with other rainbow trout and was the star of the hatchery. They even had a gift shop with special souvenirs of the strugeon. 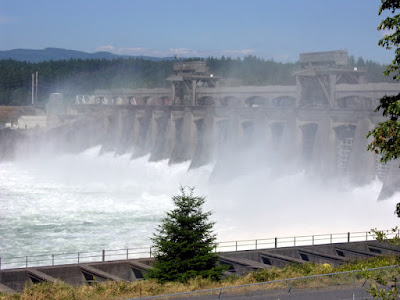 After our visit at Bonneville, we again headed east to the city of Hood River. The wind constantly blows on the river here and it's famous for the wind surfing. Inland from the river is farm land that supports a diverse apple crop, and wine grapes. It's a beautiful area with Mt. Hood in the background. Of course we had to stop and taste some wine. A nice way to end a fun day with Ken & Donna.
Posted by John Huber at 10:20 PM