The Bar in the Desert

Last year we missed the trip to the Bar in the Desert, so we made sure we were able to go. We carpooled and caravaned out to Parker, AZ, and then drove about 5 miles on a graded gravel road to reach the bar. Officially it's called the Nellie E. Saloon, but considering the location everyone refers to it as the bar in the desert. It's only open on Sat. & Sun. from noon to sunset. Everything runs on batteries that are charged by solar panels on the roof of the bar. There's no cell service either. It's as bad as the campground we worked at in the Olympic National Park!


The bar was opened in 1983 in a small 3 sided structure. As it's popularity grew, the bar developed a little at a time. All of the materials were brought in by truck, including the water that was transported in an old fire engine. They later drilled a well, hitting water at 360 feet. The tall towers you see are a cooling system, similar to a swamp cooler. 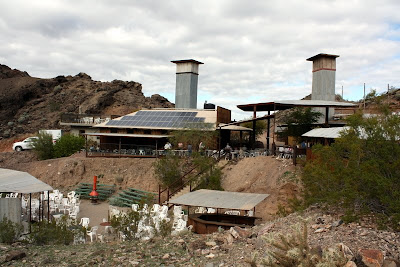 The view from the back of the bar is great, and you can see some of the road we used to get here. 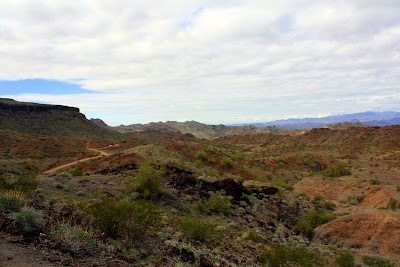 This is the patio below the entertainment stage close to the grill area. There's a limited menu: hamburgers, hot dogs, chili, and veggie burgers. They serve mostly beer, but also carry limited liquor and box wine. Oh, and they don't serve cheese, ever! You can learn more about the saloon by clicking on this link. 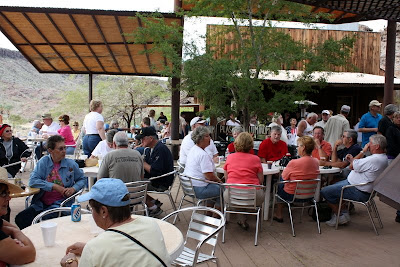 Here's a picture of our table and group. We had about 14 people. We got there early to make sure we had enough chairs. 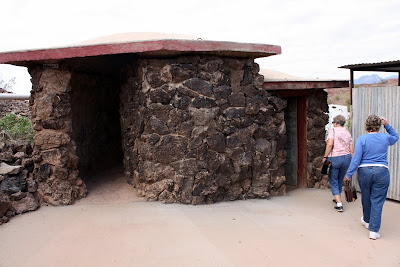 We were very glad we made the trip. The band was good, the beer was cold, the chili was OK, and the conversations first rate. If you want to see all of the pictures we took that day, click on this link:
http://picasaweb.google.com/winequest/TheBarInTheDesert#
We're definitely coming back next year!
Posted by John Huber at 7:57 PM

It looks like you guys had a lot of fun...but what do you mean coming back next year....are they only opened once a year....I will go back and click on the link to find out more. Loved the pictures!