We spent the weekend helping Jeni get ready for her move. On Friday Linda boxed and boxed. On Saturday she had another garage sale, and then John took the leftovers to the Goodwill. Jeni can barely get her car in the garage with all of the boxes.

On Saturdays in Pendleton there's a farmer's market with local produce, baked items, flowers, and home made crafts. We were late getting there this week so a lot of the booths were gone, but John was still able to get some cookies. 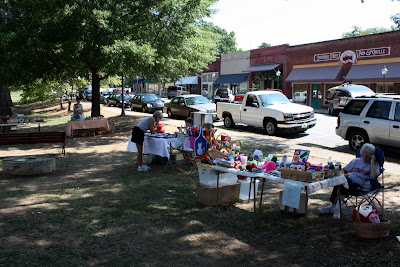 The market is located on the "square" where there's a building dating back to 1880. It was the city hall, but it's to small for that (government has a way of growing over the years), so now it's a restaurant. 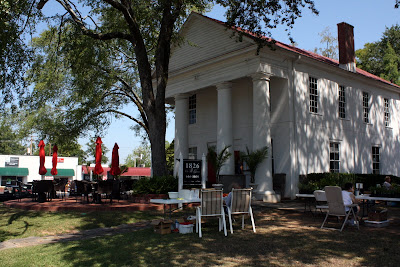 There's some good stores and restaurants around the square, including antiques, handmade items, coffee shops, and bakeries. It's a nice place to spend an hour or two, and it's walking distance from Jeni's house. 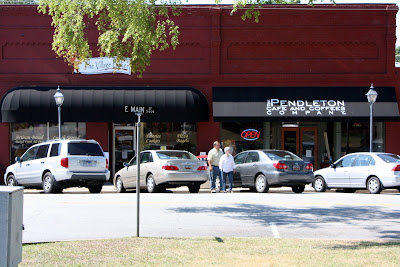 Back at the campground, it was very active. The campground was full, and the lake was busy with boats and jet ski's. There was a lot of families, and everyone was having a good time even though the high was 93! 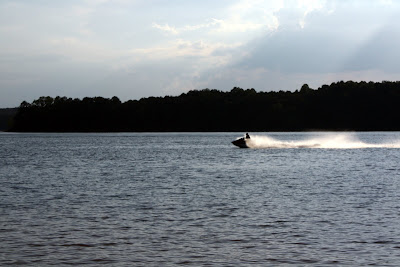 Pontoon, or party boats, are very popular down here. They hold a lot of people, and you can swim, dive, fish or party on them. Some even have BBQs on them for cooking. 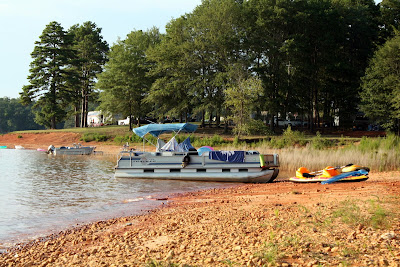 On Sunday Linda & I went to Greenville for a shopping expedition. There's a nice mall with Dillards, Macys, Pennys, & Belk, a local department store. We didn't buy much, but John got some nice wine glasses at Coldwater Creek. They have a school of tiny fish in the side of the glass. We had a nice Mexican dinner at a restaurant called Don Pablos. Even in the south they have good fresh southwest food. It doesn't measure up to CA or AZ, but it was good after a long dry spell.
So that was our weekend. More later.

The town looks cute! But Johnny, fish on the wine glasses...??? And thank goodness the government grows, as that is why Ken still has a job...:-) Since you didn't comment about rowdy crowds on the lake...that could have been fun to watch! Lastly, I went to Don Pablos website...that is too cool! The food actually sounded great! The chicken enchilada sounded a lot like my old favorite. Keep the blogs going, love seeing everything!
Love, Donna

Hi !.
You re, I guess , probably very interested to know how one can manage to receive high yields .
There is no need to invest much at first. You may begin to get income with as small sum of money as 20-100 dollars.

AimTrust is what you thought of all the time
AimTrust incorporates an offshore structure with advanced asset management technologies in production and delivery of pipes for oil and gas.

Its head office is in Panama with affiliates around the world.
Do you want to become a happy investor?
That`s your chance That`s what you really need!

I feel good, I started to take up income with the help of this company,
and I invite you to do the same. It`s all about how to select a proper partner who uses your funds in a right way - that`s AimTrust!.
I take now up to 2G every day, and what I started with was a funny sum of 500 bucks!
It`s easy to get involved , just click this link http://isususeze.1accesshost.com/nonoga.html
and lucky you`re! Let`s take our chance together to become rich