On Sunday Bob & Maggie picked us up to explore the area.  We first went to Montezuma Castle, just outside of Camp Verde.  It is a five-story, 20 room dwelling built high above Beaver Creek in a recess or cave in the mountain. 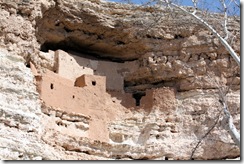 It was built by the same Sinagua Indians who built the Tuaigoot.  There was valley  at the base of the cliff that the Indians farmed using the reliable water source of the year round Beaver Creek. 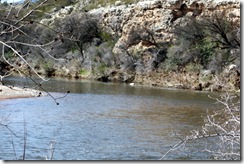 Here’s a model of how the rooms might have looked when it was occupied. 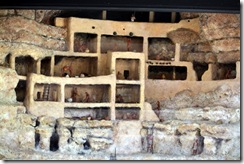 These Indians disappeared at the same time as the Indians that occupied Tuzigoot and other locations in the Verde Valley.  And no one understands why.

As we were hiking the path around the area we saw a beautiful red tail hawk. 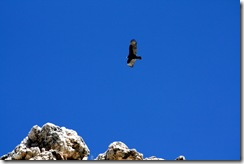 Our next site on the agenda was Montezuma Well.  You might wonder where the name Montezuma fits in.  Well, when the first Spanish explorers discovered these ruins, they  thought they were built by the Aztec Indians of Mexico, so they named them after their chief Montezuma, and the name stuck.

Montezuma Well is a lake filled by a spring that delivers 1.5 million gallons of 74 degree water everyday.  It’s located in a collapsed limestone underground cavern.  You walk up a hill in the middle of the desert with lots of cactus around and then “boom” its there. There was signs of Indians living here also. 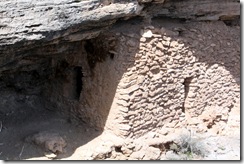 After a lot of hiking and reading about these sites, we were ready for lunch. We decided to try the Castle Cliff Casino which was nearby.  It’s unusual in that it has a large area for families with video games and a bowling alley.  We ate at The Gallery which was the 24 hour restaurant.  Linda had the NY Steak Sandwich, while I had the special, an Asian Salmon Salad.  The salad was very good, no foo-foo lettuce, but Linda’s steak was a little tough and grizzly.

So that was our educational day.  If you want to see all 120 pictures of the 2 days, click on the following link:

Wow, Ken and I stayed at a B& B just down the road from the Montezuma Castle when we visited Sedona....and we ate at that Casino too....I would say small world, but there wasn't much to choose from....Glad to see that I can start putting comments back, but now I have a lot to catch up on....