We left Eureka with a goal of making it South of San Francisco.  Looking at our options, we thought the Thousand Trails Preserve at Morgan Hill would be a good overnight stop.

The road started out really good with 4 lane divided highway that we were on the previous day.  But when we got to the Richardson Grove area it turned into a narrow 2 lane road with tight curves all the way down to Leggett.  They didn’t want to cut down any of the old Redwoods, which is a good thing, but it did make for some slow driving.

After that it got better as we made the slough through Sonoma Wine Country, Santa Rosa, and Marin County.  We were careful because we didn’t want to cross the Golden Gate Bridge and get dumped into downtown San Francisco, so we took the east side freeway, I-580  past San Quentin and over the Richmond Bridge. 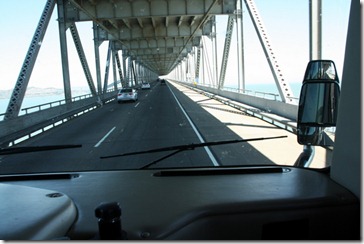 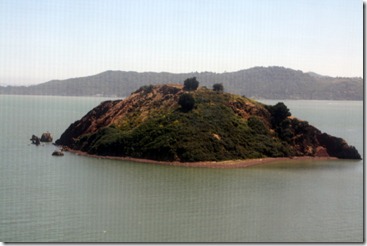 We rejoined the 101 south of San Jose, and an hour later we were pulling into Morgan Hill after about 8 hours on the road.  And did I mention that there’s no rest stops on this whole drive, so stopping is difficult.  This is a typical TTN preserve, meant for camping, not overnight stops.  All the sights were gravel and in trees.  The park was pretty full and we had a little trouble finding a site.  They’re all 30amp sites with no sewer, which was fine because we were just going to be there overnight.  The layout is a little different from most campgrounds in that the utilities for 2 sites are in the middle, so one rig pulls in facing one way, and another rig pulls in the opposite way.

Tomorrow will be a short drive to Santa Maria where we’ll spend 2 nights preparing ourselves for the final drive through Los Angeles.