On Wednesday we decided we needed a wildlife fix, so we went to Custer State Park. This is one of the largest state parks in the US. In fact, we only saw about half of it before we ran out of time.

It has 3 lodges, campgrounds, 3 lakes, forest, prairie, and a lot of acres. The main reason we came here is to see the Bison herd.

On the way to the park we almost ran over some wild turkeys in the road. There was about 15 turkeys in the group, and one did actually fly to get out of the way of the car. Pictures are in the Picasa Album. You can click on the link at the bottom of this post.

Once we were in the park, John insisted we stop at visitor center. He never gets his fill of visitor center! We got a map from a volunteer, who just happened to be a fulltime RVer. It seems the park has a large need for staff during the summer, and some rvers will work 20 hours a week for a full hookup site in a beautiful place. We also visited the general store and the game park lodge. It was pretty quiet, most of the visitors leave after Labor Day, which makes it nicer for us.

From the lodge, we followed the Wildlife Trail, a road that meandered through the park past meadows and forest where the local animals hang our. The main herd in the park is Bison, or Buffalo, and that's what everyone comes to see. 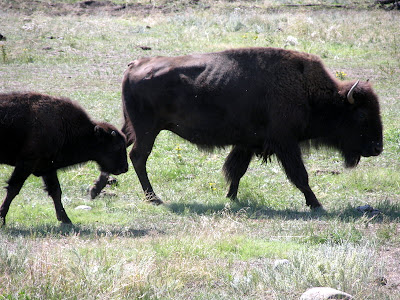 Here's a picture of a mother & her calf walking along the creek. Up on the hill was a large herd, just hanging out. The park has about 2000 Bison. Every year they do a roundup, This year on the first weekend of October. All of the Bison are moved into corrals, where they're evaluated, given a medical checkup, tagged, branded, and sorted into different groups. Because the park can only sustain about 2000 Bison, some of the herd is seaparated and auctioned off in November.

Bison aren't the only inhabitants of the park. Years ago some burros were released into the park, and they multiplied. Today, they are the popular begging burros. As you can see, they like people, or at least people food. Check the online album for pictures of Linda & John embracing the wild. 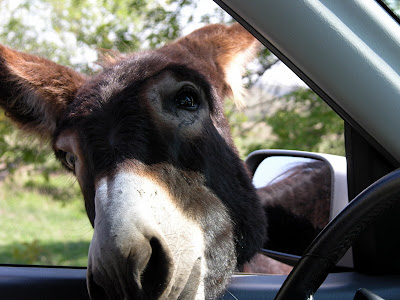 Other wildlife we saw on our journey include white tail deer, prong horn antelope, and more turkeys. We saw some birds, but the park has over 65 different varieties that we couldn't identify. 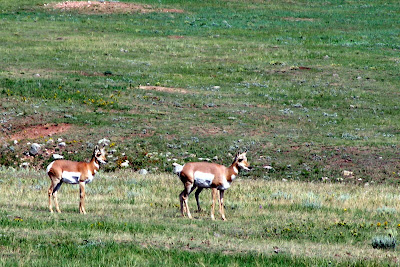 Finally, we saw a Prairie Dog Town. We almost missed it because John expected a lot of mound close together, but these were very spread out. There was no road sign, so many visitors just drove past without seeing them. Linda thought they were very cute. In fact she thought she heard one of them bark! It sounded like a dogwood tree, Bob. 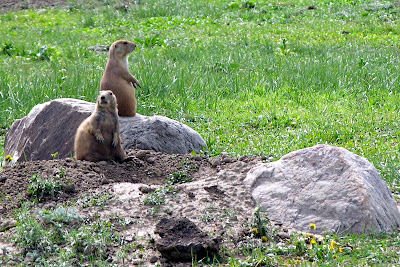 If you would like to see more pictures, click on this link:
http://picasaweb.google.com/jchuber1/CusterStateParkSD
and it will take you to our Custer Park web album. As always, any comments or emails are appreciated.
Posted by John Huber at 6:02 PM

ooo I love this entry! It's so cool that the burros (how do you know they're not donkeys? is there a difference?) let you hug and pet and feed them! And the bull bison are so big! The prairie dogs look really cute...how close were they? Your picture looks pretty close but I thought they were skittish so maybe you were using your telephoto lens? I want to go here sometime...it looked so great! I'm glad you shared it!