We Arrive in Kanab, UT

We left Hart's Ranch on Sunday for the long drive to Southern UT. On the first day we made as far as Rawlins, WY. It was a stressful day, because we had 30-40 MPH winds mostly from the side, but some head on. We didn't make as much progress as we wanted to because of the winds. We overnighted at a Flying J truck stop, a first for us, but we didn't have many choices in WY.

The next morning was cold, and as we drove west on I-80 it got colder. In Rock Springs it started to snow, which broke one of John's rules about never having snow on the roof of the motorhome! It didn't stick to the freeway, but it stuck to the windshield. It continued to snow on and off until we reach the UT border when it stopped. It's a long down grade into Salt Lake City, where we merged onto I-15 south. We overnighted in a Wal-Mart in Cedar City UT where it was sunny, but cold enough overnight to put a coat of ice on the motorhome and pilot. When we tried to start the pilot, the battery was dead. Luckily, since we were at Wal-Mart it was easy to purchase a new one and we were on our way. By mid day we found our campground in Kanab, parked the rig, and headed on to Best Friends Animal Sanctuary for a visitor tour. Linda's going to volunteer for a week at the sanctuary while John going to explore the area and catch up on some chores. 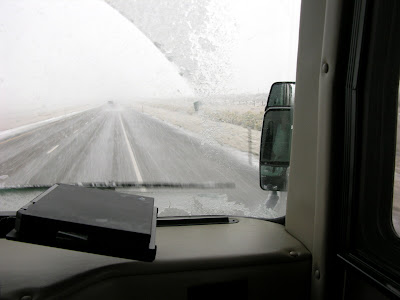 More on Best Friends in our next post. Stay tuned, it'll be interesting.
Posted by John Huber at 8:21 PM

Wow - you two have covered a lot of ground since we last saw you in Washington! That was only a little over three weeks ago! Im surprised that you're traveling so far each day. I think I would stay in Wyoming longer. Ive been following your trek on mapquest and I remember the road you're on now - we were in Utah a couple years ago - stayed in Midway, near Park City. Ive really enjoyed looking at your blog and pix on the picaso site. What are your plans? Looks like you'll be in LA in a couple weeks. Whats the rush?

Snow?! In September?! Wow! I don't like driving in snow, but I do think it's beautiful so I really agree with Kenny because I would want to stay longer at each place and not drive! I won't mention your betrayal...I'm not saying a word not one single word (growl!). Can't wait to hear more about Best Friends!!!!