We're winding up our stay at Hart's Ranch. It's been a fun week, even with the interesting weather. Thurs. night we had 60 MPH winds, yesterday was breezy with a high in the high 60s, and today it hit 92. If you don't like the weather, just wait a couple hours and it'll change.
Rapid City is called the City of Presidents, not only for it's close proximity to Mt. Rushmore, but because they have placed bronze statues of the Presidents on street corners in the downtown area. We enjoyed doing a virtual geocaching, identifying each President based on the coordinates we downloaded. Here's a picture of John with Thomas Jefferson.
As you can see, they're very well done. They cost $50,000 each, and 4 new ones are placed each year. They are there 24/7, but there's been no vandalism.
After we visited with the Presidents, we found some other geocaches, including one at an actual section of the Berlin Wall, and one near Dinosaur Park. Geocaching is a lot of fun and a great way to get some much needed exercise. 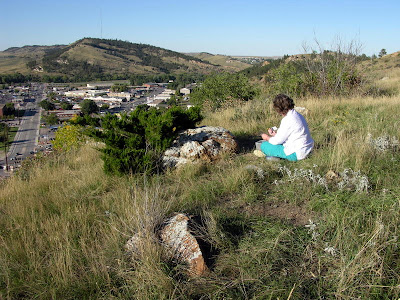 On Friday we drove West to Spearfish, and a scenic drive through Spearfish Canyon. The trees were just starting to turn on the creek that had created the canyon. It was very beautiful, and we found another Bridal Vail Falls. There must be one in each state. At the end of the canyon the road wound through Lead and Deadwood, both historic gold rush towns. Lead has a producing gold mine called the Homestake. It's currently at the 8000 foot deep level and is stilled being mined. Deadwood's claim to fame is the location of where "Wild Bill"Hickok was killed. He was sitting in a poker game, holding a pair of aces & eights, forever after known as the dead man's hand. He was shot from behind. He's buried in the Moriah Cemetery next to Calamity Jane, who he couldn't stand. Today Deadwood has many small casinos that keep the town in business. We were disappointed in the commercialism of the town, but we had a nice lunch at Kevin Cosner's casino which contained a lot his memorabilia. 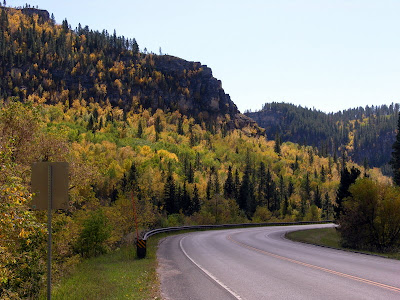 We ended the day back at the Mt. Rushmore Monument for the evening program. They had a nice dining room, so we shared a nice chicken dinner, then went to the outdoor program. It started with a talk from the ranger, then a stirring movie about the carving and the history it represents. At the end they played the Star Spanked Banner and the mountain slowly lit up. It was very moving. At the end, the ranger invited all veterans up on the stage to lower the flag. It was a great way to end the day. 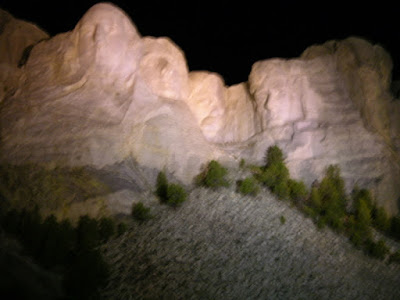 On Saturday, we cleaned the motorhome, did some shopping, and got ready to leave our home state. We're heading back through Wyoming towards Utah. Hopefully we'll get good traveling weather with little wind.
If you would like to view all of our photos of the greater Rapid City area please click on this link:
http://picasaweb.google.com/jchuber1/RapidCitySD
Thank you for sharing our adventure with us.
Posted by John Huber at 9:49 PM

I liked all the pictures of the President statues. They were SOOOOOO realistic! I wish I knew who was who though...I really need to study some history because I don't remember much. I especially liked the statue of the President with his dog, and the one (I think it was probably JFK) with the little boy. The R2D2 mailbox was so cute! And I bet Rick and Val would love to see all the Harley stuff huh?!